Will there be colours?

And, as tempting as it is to say:
«There are only colours on the VIP-tours,»
and then move on.  But I’ll try to go into it.

We have all seen these pictures of the Aurora where the green is super-green and, there is red and magenta and pink and purple and yellow. And then the elderly lady from India who is sitting inside the bus because it is so cold outside finally puts down the iPad and comes out to see the Aurora can only see a white cloud looking thing in the sky.

Colours in the Aurora

Human Eyes Are Bad at Seeing in the Dark.

The first thing that we lose is the colour vision. There are two light sensitive organs, photoreceptors, in the back of our eyes: Rods and cones.  Shortly one can say that the rods are do not see colours but, give us night vision and side vision. Cones gives us colour vision and senter vision. The result is that we cannot see colours that well in the dark even if they (the colours) are there. This is manifested in proverbs in several languages:
Norwegian: «I mørket er alle katter grå.»
German: «Nachts sind alle Katze grau.»
Spanish: «De noche todos los gatos son pardos.»
French: «La nuit, tous les chats sont gris.»

Even if we CAN see in the dark it takes time to get used to it. There is a muscle in our eyes called the iris sphincter muscle that has to relax and open up so that the light can come through the iris and into the rods and cones so that we can see the little light that is out there.

As a photography student, I spent a large portion of my time at university in the darkroom. I remember how it would take at least 30 minutes to really  get used to the dark. And the only thing that helps is being in the dark.

On top of that we also know that the night vision gets worse as we age.

A Camera Sees the Colours That Are There

Different cameras have different sensors and records colours differently
Different brands and, different models within the same brand will record the same scene with different colours.
As a Canon user for many years I know that Canons are particularly sensitive to red. So much that I often have to reduce the saturation of red when I take photos of other things, like people. (Especially sunburned Northern-Norwegians). Red is also the first colour that we lose in the dark.

Then there is the question of white balance.

If you take your photos in jpeg and auto white balance, you still have to make choices of which picture style to choose. So it is not so easy as to «just take a photo of what you see and, not changing it in the computer after.»

To illustrate my point I will show two photographs in three different versions. I will not post a photograph to illustrate «this is what we saw with our eyes.» The reason for this is that peoples night vision varies. And, I don't know what screen you are using to read this blogpost. For example if you are using a Samsung phone, the colours will be stronger and more saturated than they are on my Eizo computer screen. 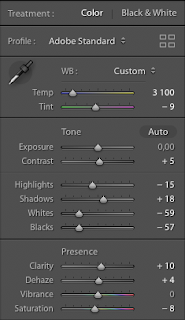 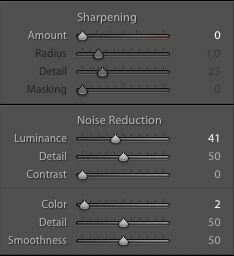 These are the basic changes that I made. Most importantly changing the white balance a little compared to how I shot it. Then I added some contrast by making the darkest tones darker (lowering Black) And I also reduced the saturation.

The «biggest sinner» in post production is probably Dehaze.

Here is a version of the same photo where I've only pulled the Dehaze. 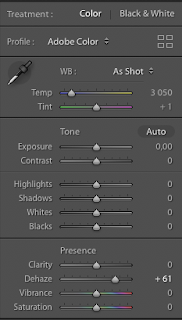 As you can see colours like purple, magenta or red is popping out.
If this is what you are expecting you will be disappointed. 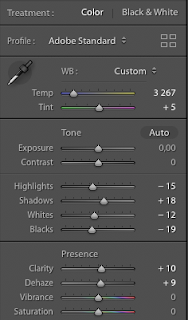 As you can see the changes I've made are quite similar. I've increased the contrast in the same way. The saturation is decreased only in two colours. 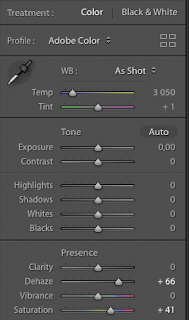 As photographers and humans we like to impress. We mostly show photos from the nights with the strongest Aurora. It can be tempting to overdo it in Lightroom. Sometimes the Aurora is strong and YES we can see many colours. Sometimes she is shy and doesn't want to show herself much. People are different. Some see colours where others don't.

Conclusion:
Take photos in RAW and don’t overdo it in the post processing.
Stay out in the dark without looking at any light sources for a long time.
Be happy with the Aurora you can see.
Eat Silvia’s vegetable soup to get those carrots that are so good for your eyes.

P.S.
There is another theory about why we cannot see the colours. Ask me about it on your next tour with Creative Vacations.